RVO events thrive on adventure, Stage 1 was predominantly flat and very smooth, but navigation was critical across the labyrinth of rural access tracks, the majority of riders wrong slotted at least once. The unique canoe ferry across the Tana River added a delightful twist to the adventure. Mike Kontos (photo) was particularly amused by the canoe ride, he is a former Olympic qualifier at sculling (rowing) and has rowed 440 km S-N across Lake Victoria!!Up front, the teams of Ride till you Bonk (Farhan Qureshi / Gurveer Sira), Farwell (Simon Lee / Warren Jacobs) and Ghostly Leprechauns (Shane Burke / Richard Walker) were setting a furious pace. Ride till you Bonk were first through WP1 at 40 km, they pressed on without stopping, “Riding till they Broke” their rear wheel bearings. Gurveer used a branch to tow Farhan 10 km back into camp. Patrick Codjia raced on his wife’s bike but destroyed the rear wheel bearings within 8 km of the start.Team Farwell were fastest on Stage 1, they were seeded 2 minutes ahead of the Ghostly Leprechauns and were never seen, finishing the stage 7 minutes faster.

RVO Kido’go: 7 kmThe very first RVO Kido’go had 7 kids, boys and girls, aged 7 upwards, riding 7 km. They were all totally delighted to ride across the cable suspension bridge, through a mud hole, up some long hills and through sand harvester quarries. My thanks go to the parents that chaperoned their budding racers.

Night Stage: 7 kmDespite numerous riders bringing their bike lights, only 5 intrepid night riders ventured out into the dark for 7 km of surreal riding. Future RVO events will include night stages whenever appropriate, so investing in a good set of lights is a bright idea.

Stage 2: 48 km: 1250m ascentCompensated for all the flatland riding of Stage 1, it put the mountain back into mountain biking! Teams set off at 2 minute intervals, fastest leaving last, racing for the KOM at 26 km, however, reaching the KOM top entailed 965m of cumulative climbing! Four short sharp climbs were needed to encourage rider legs to wake up before tackling the first mountain that peaked at 13 km, after an ascent of 180m in 3 km. The descent was very technical over rocks, washed out ruts and bushed over trails. KOM: @26 km: 965m ascentWater Point 1 replenished energy levels at the base of school hill, a middling ascent of 85m in 1 km, which was soon followed by the big climb to reach KOM at 26 km mark; a formidable ascent of 290m in 4 km. KOM honours went to Team Ghostly Leprechauns, they were first team up 5 minutes ahead of Team Farwell. The race for victory was on! Having started 2 minutes behind the rapidly disappearing Ghosts, Team Farwell had dropped 3 minutes so they barely stopped at John’s KOM water point, they immediately plunged down off the mountain hot in pursuit. Ahead of both teams was a hard race back into camp, 22 km of sustained effort on open road, alongside rail tracks, single track plus a few short sharp climbs to muster. The final result was going to be very close. 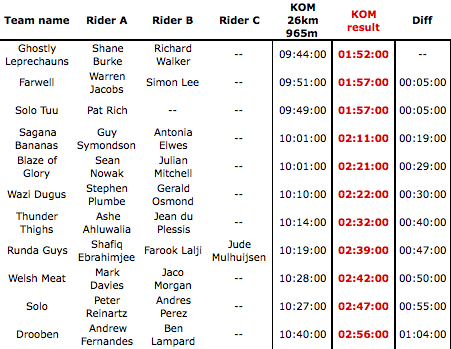 Racing off the mountain was a rush for all the junkies, what took +30 minutes to ascend was descended in 6 minutes of rocks, twists and rut hopping. Everybody except Team Drooben (Andrew Fernandes / Ben Lampard) loved this descent, that’s because they inadvertently rode the route in reverse therefore hiked up the mountain!

This event relied heavily on the committed support from our host Savage Wilderness Camp and RVO partners Coca-Cola, Dasani, USN, Castle-Lite. John Sawers managed the superb water points, Monika, Christian, Olga supported with time keeping duties. I sincerely appreciate all your support. Next RVO Sagana Hills will be on 11/12 June 2016 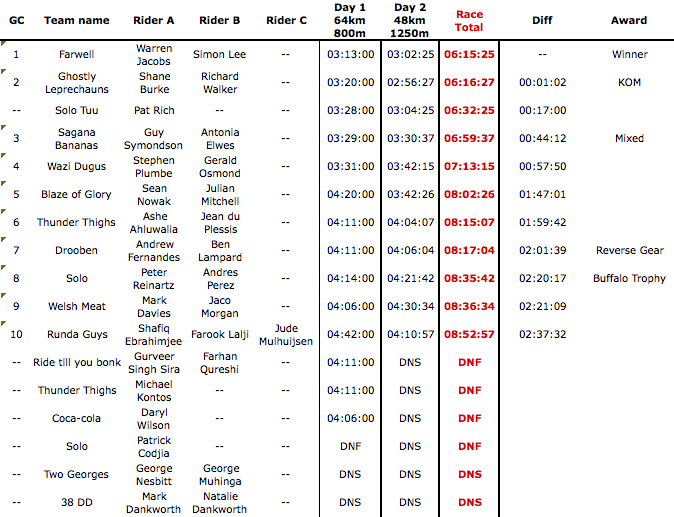 Getting Fit For Cycling

The Ride Across Africa